Drifting, donuts, and burnouts are a big part of car enthusiast culture- for better or for worse. It’s interesting, then, that a car that was designed to offer EV buyers an enthusiast driving experience wouldn’t be able to, you know, drift, burnout, or do donuts. The BMW i3 REX, however, is exactly that car, and BMW has ensured that its i3- and, presumably, the i8 as well- will take no part in such hooliganism by fitting its “i” sub-brand cars with a traction control system that is not fully defeatable by its driver.

So, in addition to forcing you to stop for fuel every hour or so on extended road trips, the BMW i3 REX is also packed with an array of ridiculous electronic safety nannies that make it seem- I mean, definitely not awesome. At best.

Still, plenty of people in the green car community are still enamored with BMW’s little carbon fiber city car. For you guys, I’ve included a great article from out sister site, Cleantechnica, written by Kyle Field, below. Enjoy!

Why The BMW i3 Can’t Do Donuts, + Other Interesting Nuggets (Video)

The guys over at the Autoline Network dug a bit deeper into the BMW i3 in a video discussion earlier this year, pulling in industry experts and BMW Product Management rep John Kelly to really unpack the car even further than just nuts and bolts… going all the way down to the fibers and adhesive that comprise its “Life Module.” The episode also features regular John McElroy, Gary Vasilash, and Gary Witzenburg.

The BMW i3’s carbon fiber Life Module is constructed of carbon fiber members bonded together with special structural adhesive designed specifically for these cars. While using an adhesive might sound a bit wonky for a futuristic carbon fiber car, the BMW rep shared that the adhesive is actually stronger than the carbon fiber, which is simply amazing. The modular design allowed BMW to standardize the repair process where BMW can just cut out the impacted pieces and “weld” in the new piece. The cars actually have cut lines designed into the structure which facilitates more standard repair procedures. The skin of the car… or rather, the body panels, are made from thermoplastic except for the roof, which is carbon fiber. 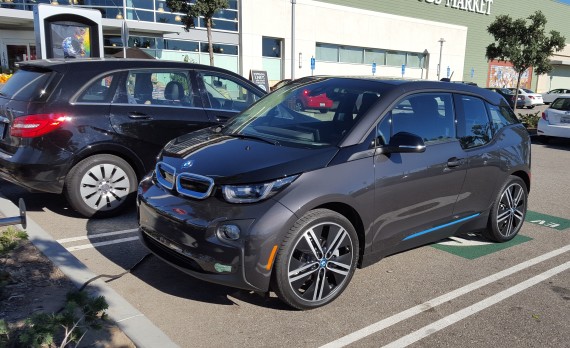 Digging into the Range Extender (REx), Mr. Kelly shared that folks who bought the REx version simply are not using it on a regular basis. They bought it in order to quell the infamous “range anxiety,” not because they need it for their daily commutes. But they do typically use it for infrequent, extended trips (road trips, vacation, over the river and through the woods on the way to grandma’s… you know the story). This is as expected, but good to have BMW confirm that’s the case.

Curiously, John shared that the BMW i3 battery is repairable and that all 338 BMW dealers have trained technicians that can make the repairs. Because this is a fairly generic statement given the size and complexity of the batteries, he qualified it. BMW does not replace individual battery cells (the car has 96 of these), but it does repair and/or replace them in blocks or “modules” as BMW calls them (there are 8 in each car with 12 battery cells in each). That allows for a relatively cheap fix if some cells do go bad — no need to swap out the entire battery pack. (Note: this was also highlighted by the folks at Munro & Associates who labelled the i3 the “most advanced vehicle on the planet.”)

Finally, they shared what can only be described as bad news for the gearheads out there… the BMW i3 cannot do donuts. It has dynamic stability control that is “not fully defeatable.”

What the BMW i3 is Teaching BMW

Win A Tesla! Save The World!