It’s that time of year again. I do so love Halloween. The costumes, the candy, the parties, it’s all so much fun! Halloween also means it’s time for another family tradition of ours: Trunk or Treat! The day that I will clean out the trunk of my car, decorate the hell out of it and yell at rambunctious kids not to touch it. The day that I will threaten small children with violence if they take more than one piece of candy. Okay, so maybe not violence but I will at least threaten to tell their parents. While my Nissan Leaf is going to look pretty sharp and spooky, it won’t hold a candle to any of the cars you are about to see. Today we honor the brave souls who dare to allow children around their beautiful Tesla automobiles and bring you the best of Tesla Trunk or Treat!

Disclaimer: I know that not all of the vehicles in this article are participating in an actual Trunk or Treat event. Some are just dressed up for Halloween and some are just scary. I’ve just always wanted to use the phrase “Trunk or Treat” in an article and this is probably my only chance to do so. Now that that’s out of the way here we go… 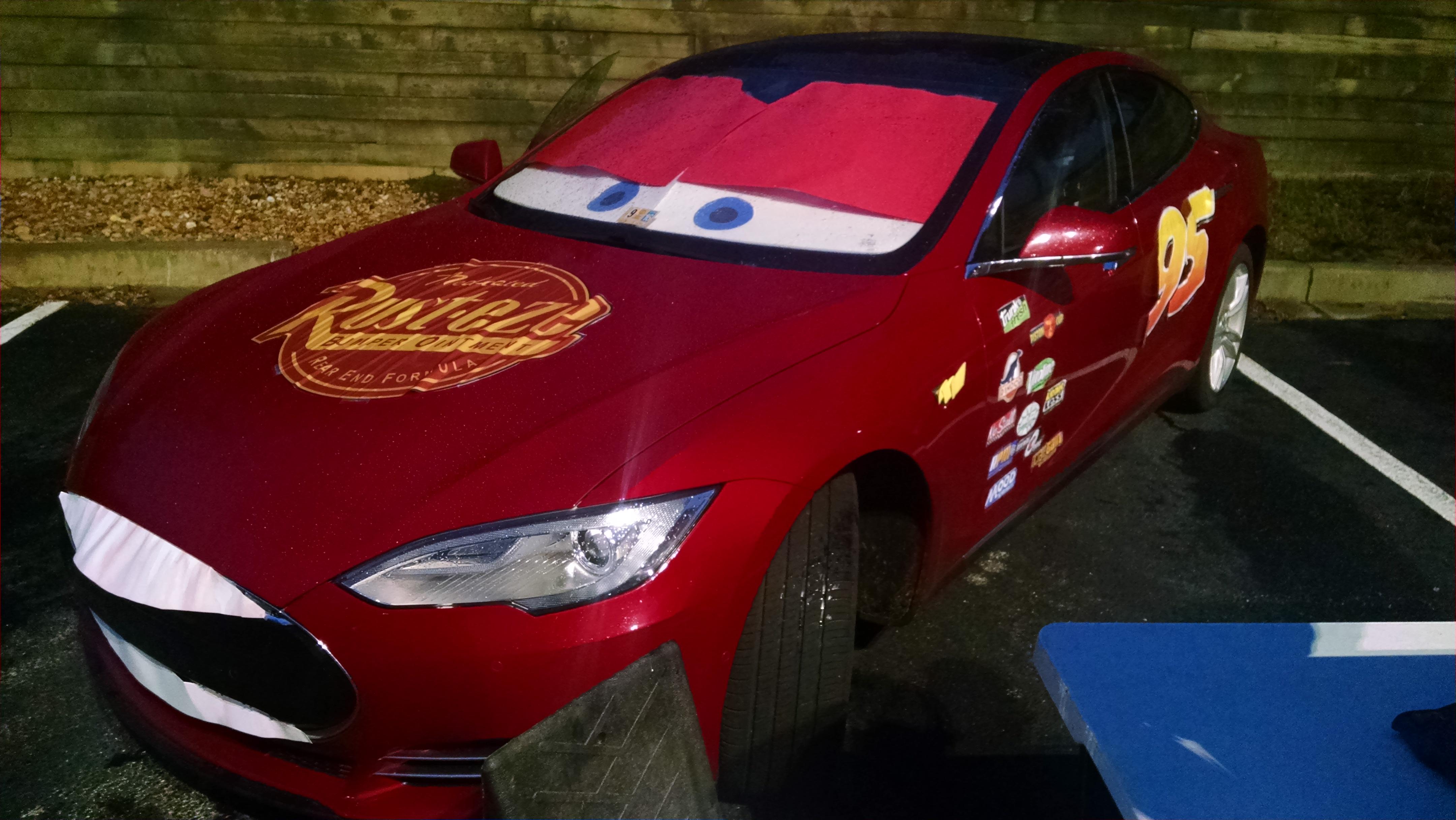 If you’re like me, you’ve seen Disney’s Cars about ten trillion times. Who can forget the heartwarming love story between Lightning and Sally? The redemption of the town of Radiator Springs? The hilarious comedy stylings of Larry the Cable Guy as Tow Mater? It was an instant classic! This Model S owner did a smashing job of making their red sedan look an awful lot like the movies’ protagonist. I just really, really hope that those stickers don’t damage the paint…

Let’s see here…stobe light? Check. “Monster Mash” playing the background? Check. Fangs on the grill for extra creepy effect? Check. When his kids decided that they were too old for Dad to chaperone their trick or treating, Pittsburgh resident and Tesla owner NZCUTR decided to take matters into his own hands. In an effort to make his garage “intimidating” as he puts it, he added a little bit of flair to his Model S. NZCUTR had originally placed the strobe light under the bumper but ultimately decided placing it directly in front of it was a better look. For updates on additional spooky ideas and other topics regarding all things Tesla, check out his blog by clicking here. 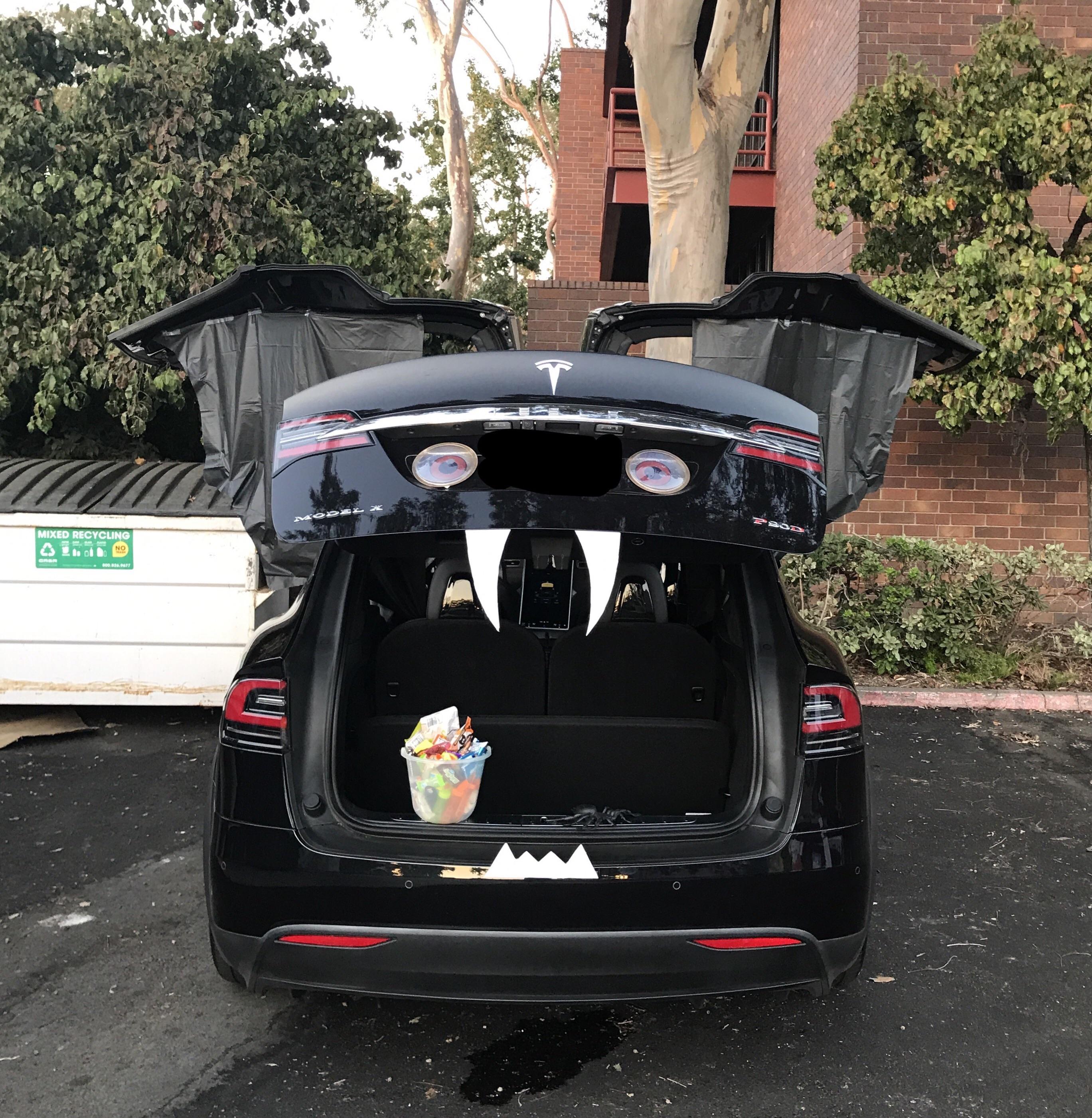 I love this one for it’s simplicity. Some parents spend hundreds of dollars on their decorations and don’t get anywhere near the creepy effect that this Model X owner was able to achieve. With black trash bags for wings on the falcon doors, spooky fangs, and a few eyes added for dramatic effect, it’s almost as if this car was built to look like a bat. As much as I love the Model X I wouldn’t go anywhere near it…I’m a certified arachnophobe and that is a big ‘ol spider.

Remember the show “Jackass” on MTV? I loved that show. It was chock full of people doing things that they in no way should have been doing but was hilarious to watch. This video falls into that category. Tesla’s “Smart Summon” feature was introduced in September of this year and according to theverge.com, has been used over a million times to date. A Youtuber using the handle DLTESLA recorded this awesome video of a skeleton “driving” his Model 3 while using Smart Summon. As per usual, the comments section for this video don’t disappoint. One participant suggests taking it through a drive through. This is going to get out of control isn’t it?

If the Model S, Model X, and Model 3 become any more popular, we may have to change the name to “Frunk or Treat.” I have to admit that I’m not entirely sure what this creepy character is supposed to be. At first I thought it was a snake, but then I saw the teeth. A cat or other kind of ferocious mammal perhaps? Whatever it is, it looks really cool and the way the teeth are arranged is fantastic. The eyes have a great menacing look and the use of the red blanket is the icing on the cake. Congratulation on a job well done “Geeks!”

In December of 2016, Tesla released a hidden feature or “easter egg” for the Model X. Owners can now set their cars to play music and have the various lights on their vehicle flash in tempo with said music. A Youtube user named Saira Asadullah uploaded this video of her Model X just before Halloween in 2017. In addition to the lights and music, her house looks well decorated for Halloween and a super scary spider is perched on the hood. Pay close attention to the falcon doors and the way they move to the music. Awesome! That is a Model X under there isn’t it? When I was a boy I loved “It’s the Great Pumpkin, Charlie Brown.” I had to emulate the kids who cut holes in their bed sheets and went as ghosts to trick or treat. Thankfully, I was never given a rock as a treat unlike poor Charlie Brown. I wonder if this Tesla owner had a similar affinity for the Peanuts gang as a kid. I also wonder what kind of material he or she used to make their Tesla into a ghost with fangs? That would need to be one gigantic bed sheet!

What do our readers think about these Trunk or Treat Teslas? Have any of our readers care to share their experiences with Smart Summon mode? Have you ever dressed up your car for Halloween or any other holiday and want to share your work with us? Please feel free to post any comments and/or pictures or links in the comments section below. We would love to see them!

CCS Charger – Everything You Need to Know