Looking for the right way to install a Tesla Model 3 front license plate? We’ve got you covered. After reading today’s article and watching the YouTube link embedded below, you will have no trouble at all doing so.

There are a few things that I miss about living in Florida. It doesn’t snow there. I had a house with a really nice pool. There’s nothing like barbecuing in your swimsuit when it’s 150 degrees outside and taking a dip to cool off. For all of its faults, the government of the State of Florida seems to be a bit more…relaxed than other state governments. They don’t require motorcycle riders to wear helmets. They also don’t require cars to have a front licence plate installed. Florida is somewhat of an anomaly in this regard. Out of the 50 states in the United States, only 19 of them do not require their drivers to install a front license plate. These states are, in no particular order:

A Bit of Controversy

Believe it or not, the front plate vs. no front plate discussion is not without its share of controversy. In 2012, researchers at Texas A & M University conducted a market research study comparing front license plates vs. no front licence plates. According to Senior Research Scientist Melissa Walden who served as the project manager for the study:

“When we first started looking at this, I never really gave it much thought about why anyone would care about whether you have a front license plate, but apparently, there are a good number of people who are concerned about it from purely from an aesthetic standpoint, and then they try to make a justification that it would be a great cost savings not to have a front license plate.”

Indeed this study did find that requiring drivers to modify expensive vehicles could cause damage to the car. As a contributor to this article posted on the newswheel.com last year going by the name “Sixpence” mentions:

“It’s the irreversible act of drilling holes into the car which sends us ‘round the bend. Those of us not wanting $1000 damage (or more!) done to the car’s front bumper are the ones who’ve spent the time, money and energy to have a 2nd (3rd or more) car we’ve purchased for our enjoyment. Be it a new Mustang, Corvette or Ferrari, it’s the fact that holes are being drilled directly into the car’s body and we don’t appreciate it.”

“Sixpence” has a point. Why spend big money on a car only to be forced to drill holes in it?  The study also found that having front license plates can potentially assist in identifying suspects in hit and run accidents, provide additional opportunities for photographic evidence, and increase overall visibility of the car. I won’t take a side here…I’ll let my dear readers fight it out in the comments section below. For today’s purposes, we won’t even entertain the idea of drilling holes in your precious Model 3. We will be describing the process for installing a front license plate holder with an adhesive backing. 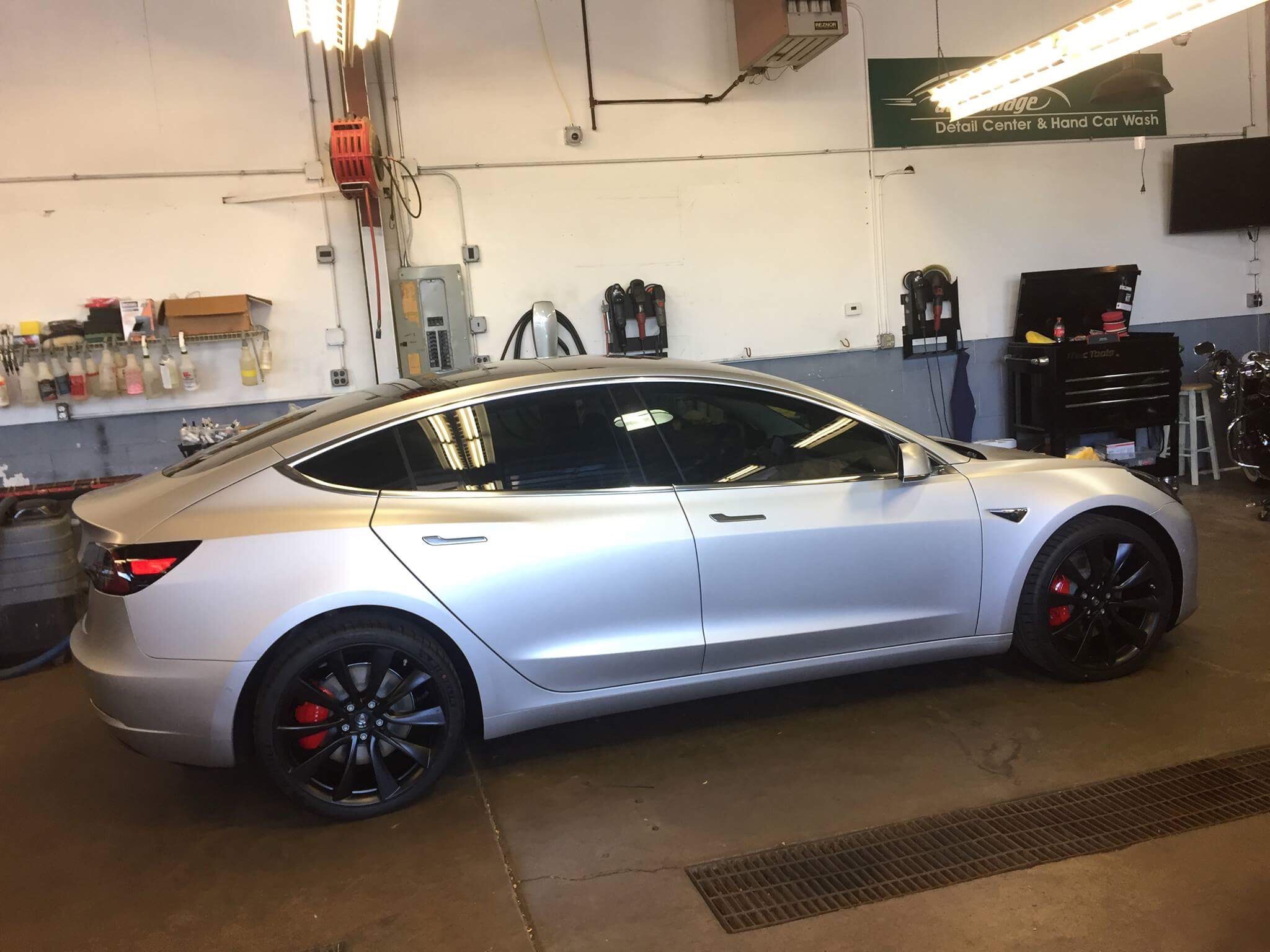 How to Install a Tesla Model 3 Front License Plate

Chances are, if you own a Tesla Model 3 you’re going to need a front license plate. This is because statistically speaking, you probably live in California. After all, over half of all of the Teslas sold in the United States are sold in the Golden State. Texas, Florida, and Virginia also have their share of Tesla owners, but California is definitely king. If you’re in California or one of the other 31 states that do require a front plate, here’s how you can ensure compliance:

Step 1: Wash your car’s front grill area very well. Use the soap you normally use to wash the car, and dry this area with clean towels. You can use paper towels or regular towels, but please make sure they are clean. The adhesive on the license plate mount that you will be installing is VERY strong. You don’t want any dirt, lint, or any other type of particles under it because it can weaken this adhesive.

Step 2:  Peel off the sticker at the top of the license plate mount. There is only one sticker and it is the only one running horizontally.

Step 3: Peel off the stickers on the side of the license plate mount, but only halfway down.

Step 4: Line up the bump in the middle of the license plate mount in the exact center of the car. A handy dandy trick is to use the Tesla logo on the hood as a marker.

Step 5: Bring the bottom lip of the license plate mount up to the bottom of the grill and press the horizontal adhesive strip to the bumper.

Step 6: Remove the remaining sticker on each side of the mount and press down hard into the bumper.

Step 7: Take a step back and feel great knowing that you are going to be in full compliance with your state’s motor vehicle code!

I found this succinct, excellent video on YouTube that you can use to walk you through the process if you’re interested:

A big thanks to Chapman Tech for sharing!

As I was scrolling through the comments below the video, I noticed one contributor cautions against using paper towels and insists on microfiber. I’ve always used paper towels to clean the windows of my car and sometimes, the exterior. Can anyone tell me why using paper towels is a bad idea?

Anyone out there have experience with installing a Tesla Model 3 front license plate? Do you have any tips or tricks for completing this task that you would like to share? Anyone get really bold and have holes for a front license plate drilled in their Model 3? Let’s talk about it in the comments section below.

How to Reboot Your Tesla Model 3