One of the biggest stories this year was the reveal of the 2015 Ford F-150, which shed its steel body in favor of a lighter aluminum one. Ford did this to shave weight and improve fuel economy, and it finally got around to releasing the official curb weight ratings for most of the new F-150 models. 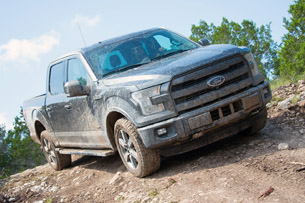 That’s all well and good, but how do these numbers stack up compared to trucks from Ford’s two main rivals, GM and Chrysler? Well a 2015 Chevy Silverado with the 4.3 liter V6 engine weighs a half-ton more than the aluminum F-150 with a curb weight of 5,073-lbs, and the 5.3 liter V8 models tip the scales at 5,169-lbs. That’s a tremendous weight savings over GM, but what about the Ram 1500, which has run away with the best fuel economy ratings thanks to the 28 MPG EcoDiesel V6 and 25 MPG Pentastar V6? Chrysler also used aluminum in strategic points around the 2014 Ram 1500, which brings its curb weight down to 4,684-lbs, less than the Silverado but still more than 600-lbs heavier than the aluminum F-150. That’s about how much the 2014 Ford F-150, with its still-steel body came in at.

Is This the One?

So is this the 700-lb weight savings Ford had claimed? Perhaps, though keep in mind there are more than 40 different 2015 F-150 engine and body configurations, ranging from the previously mentioned 4,050-lbs all the way up to 4,900-lbs for the two-wheel drive SuperCrew model. Ford hasn’t released specs for any of the 4×4 models except the regular cab, though you can figure the additional equipment will add approximately 200-lbs to the curb weight.

Even so, this is a pretty tremendous advantage for Ford, which plans to expand the use of aluminum to the rest of its lineup. Aluminum is increasingly seen as part of the solution to improving vehicle efficiency, from the Tesla Model S all the way down to pedal bikes.

Another piece of the puzzle falls into place, but Ford still hasn’t given us official MPG ratings. Will the huge weight savings pay off when it comes calculating fuel economy, or will Ford’s big aluminum bet be a bust?

Please leave us a comment below and let us know what you think!

A writer and gearhead who loves all things automotive, from hybrids to HEMIs, Chris can be found wrenching or writing- or else, he's running, because he's one of those crazy people who gets enjoyment from running insane distances.

CNG Trucks are Hauling Without Emissions